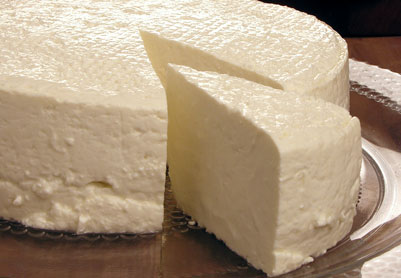 Minas Frescal (Fresh Minas Cheese) is a very common cheese in Brazil.  It is part of the daily routine of many Brazilians to eat a piece of the cheese; sometimes during breakfast, sometimes with the afternoon coffee.  It is traditionally produced in the state of Minas Gerais, where historically was located the country’s largest milk producing cattle herd, but with the increase in milk sources coming from Sao Paulo and other states, this scenario has begun to change.

It is a delicious fresh cheese made from cow’s milk; it is very white in colour and, as the name indicates, should be eaten fresh to maintain it’s mild refreshing taste.  It is not a particularly good cheese to cook with as it will not properly melt.  There are aged versions (Minas Curado) of the cheese, which are just as nice, but not as mild tasting or as white.  As the cheese is properly aged, the rind starts turning yellow and dry whilst the interior starts becoming slightly creamy.  The taste starts getting stronger slightly bitter and will be more suited to melt, as most of the whey will be gone.  The best Minas Curado cheese, in my opinion, comes from the region of the Canastra Sierra, hence the origin of the name Queijo da Canastra (Canastra Cheese).  Its texture and nutty taste just make it unique amongst the other Minas Curados.