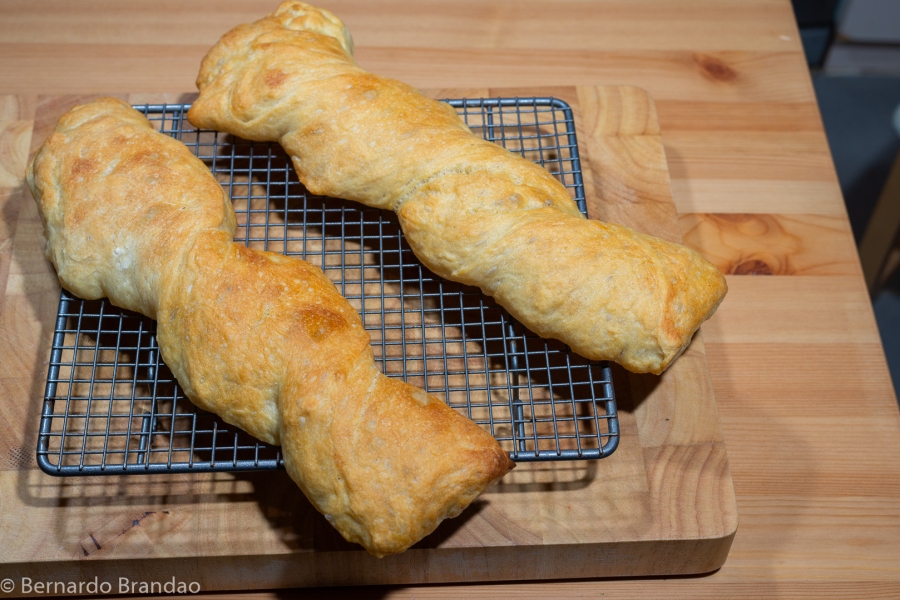 As promissed, here is my Ficelles experiment. I will not add the ingredient amounts here which I have measured to the 0.1g. The flour I went 0.1g over the weight and the water 1g. All good, not going to ruin the dough.

4:54pm – Mixed 100g of water with yeast and waited 10 minutes.  Sprinkled the salt over the flour and made a well  in the middle of the flour.

5:05pm –  The yeast was foaming, so I added it to the well in the middle of the flour, mixed a bit and added water.  Mixed a little and let it rest for 20 minutes.

5:29pm – Didn’t see much difference, but all good.  Started mixing the dough a bit rougher, without kneading, and then did the folding 4 times.

7:05pm – Checked on the dough.  It looked light fluffy but a bit irregular. I did the water test. The little ball sank, but I soldiered on and turned the dough onto the baking sheet.  Cut it in 4, oiled and stretched it out.  Two of the ficelles were already on the baking paper to be the second oven round and the other two I did a twist on them.

7:15pm – Left the ficelles to proof for 30 – 45 minutes.  Turned the oven to 240°C to preheat (helps the process) and left the first batch close to it. After 30 minutes, the dough looked like it could proof a bit more.  Let it rest another 15 minutes.

8:22pm – Removed the first batch and put the second batch in the oven.

They are delicious, but a bit too oily on the outside, but the texture of the crumb is incredible. I will definitely do this again, but tweak it and make it my recipe.

Total time from start to finish: 4 hours and 06 minutes.

One thought on “Experiment #2 – Ficelles”