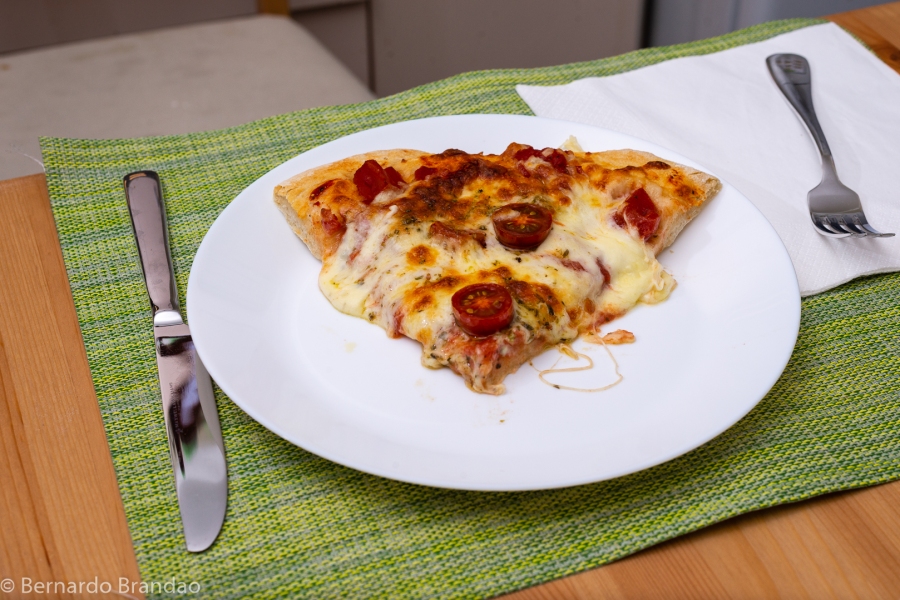 After performing 2 experiments with my bread baking I decided to analyse the results and come up with the possible missteps.

A common theme between the two experiments is that in none of the two I waited until the ball of dough was floating in the water after the rise. Both times happened because I was in a time budget – I had to go to bed/have dinner soon and would not be able to wait much longer otherwise it would become very late.

The main factor, though, that came into play with the dough not floating is that these past few days has been colder than usual and I’m guessing it is hindering the rise of the breads. If we were in a 20°C+ temperature, the dough would have surely risen enough to pass the water test in the allocated time.

In experiment #1, I think the only other thing I did wrong was to divide the dough in only 2 parts. That made huge pizzas; definitely not Neapolitan. But the texture was right and the taste was great. A winner.

I deviated from the recipe in experiment #1 in the sense that it was supposed to be a no-knead bread, and I kneaded it. I did that because the so call folding technique didn’t work… because I forgot to let the dough rest 20 minutes. I think that making the pizza dough a knead bread was fantastic and I think this “misstep” actually helped out.

In experiment #2, there was no real deviation from the original recipe. I had the 20 minute rest, I did not knead the dough. I don’t know, though, if I did the envelope folding enough times. Maybe if I had done it a few more times, the dough would have had more structure and the bread would have risen more. Maybe, maybe not.

I found the bread to be very oily. I put less oil than the recipe requested around the bread, but every time I break a piece of the bread off from this batch, I have to wash the oil off my hands. Not the sort of bread that I would buy again at a store.

It was a fun bread to make and it tastes very good, I will definitely make it again. When doing so, I will try to, instead of oiling the whole dough, just oil my hands/fingers so that the dough doesn’t stick to them. I will also always use baking paper, which helps not to stick to the pan. I might also do the envelope fold a few more times than I did to see if it gives the dough a bit more structure.